Disability before Disability: Thinking outside preconceived ways of doing research

Once upon a time there were a group of young social- and human scientists that were handed the task of finding artifacts and stories of disabled people in Iceland’s past. For three years they dug, read, looked, and sifted through heaps of material like bones, Sagas, databases, archives, legends, and historical documents. Along the way they found objects and gaps, stories and silences, people, situations, and even magical creatures that challenged them to think outside their perspective research boxes. They were challenged to rethink their methodologies and forge new tools for their search and research. They were challenged to find a way to re-tell the stories they found of difference and disability from a time before the concept of Disability with respect and dignity. The story of the young scientist is coming to an end and through the two adjacent sessions the group tells the story of their journey. They will begin with talks regarding methodology and with each presentation they will build upon the methodology and methods moving towards telling re-imagined stories of disabled people in Iceland’s past.

Disability and the conditions of narrative in medieval saga writing

Making use of Michael Bérubé’s work on disability studies and literature, this paper will explore the relationship between disability and the conditions of narrative in medieval saga writing. Drawing on examples from several Icelandic sagas, it will demonstrate how a deeper understanding of certain of the narrative methods employed by saga writers become evident through a close examination of the sagas’ representations of disability – that is, of characters with atypical or nonconformist bodies or minds. Representations of disability, for example, frequently involve straying from the sagas’ supposed default impersonal and objective narrative style, providing access to the inner experiences, thoughts, and feelings of certain saga characters. In this and perhaps other respects, disability can function as a means through which a saga’s reading audience becomes more deeply immersed in the narrative. Conversely, other disability representations in the sagas seem to insist upon forms of human embodiment that inescapably elude such insight towards characters who cannot participate in the telling of their own stories but can only be narrated at some distance by others. In both cases, a disability studies approach provides important insight toward how saga characters relate to the narratives in which they appear.

Disability is prevelant throughout the medieval Icelandic sagas. However, only a few characters are described as experiencing hearing and speech loss, and there are certainly no Deaf communities like in modern times. Perhaps this is why there has been little previous research on the topic of deafness and non-speaking people in the sagas. This paper will deal with deaf or non-speaking characters in the Íslendingasögur as well as Old Norse religious sagas and miracles. Following a Deaf Studies approach and a close reading of these literary texts, the paper will examine the alternative means of communication available to late medieval Icelanders. The paper will focus on the experiences of people with hearing and speech loss as they are described in these texts; while they will by no means be treated as “historical”, these texts nevertheless provide evidence for how deafness and non-speaking people were dealt with in late medieval Iceland. This paper will show that, despite providing little explicit evidence for deafness and non-speaking people, Old Norse literature is nevertheless a useful resource for understanding attitudes towards people living with these disabilities as well as how they communicated with the hearing and speaking world.

Guðmundur Bergþórsson as Creator and Creation: Examining the life, works and folkloric legacy of a skald

This case study of the life and legacy of Guðmundur Bergþórs­son (1657 – 1705) seeks to provide an insight into the lived experiences and artistic legacy of a physically disabled poet, to be contrasted with narratives recorded by 19th and 20th century folklorists which purport to tell of his life. Guðmundur Bergþórs­son was one of Iceland’s most active poets of the rímur genre and a significant amount of poetry attributed to him has been preserved in manuscripts and in oral tradition. Through the narrative analysis of Guðmundur Bergþórsson’s own words, as well as the cautious use of historical documents, the first part of this research aims to present a coherent picture of both an artist and an individual. Drawing upon modern understandings of disability as a social construct, folk legends about Guðmundur Bergþórsson recorded over a century after his death will subsequently be subjected to critical examination. In many of these legends, his life becomes defined by two key events relating to his disability. Associations between disability and other-than-human abilities, as well as the idea of disability as tragedy gain prominence as Guðmundur’s life is told through the words of others. Finally, by contrasting these two distinct versions of Guðmundur Bergþórsson, this research aims to encourage a discussion about the responsibilities of folklorists towards individuals who become marginalised within narrative tradition.

People who are considered physically and/or mentally different often become the object of gossip, and the stories about their differences affect both the individuals in question as well as the community. We work from the idea that disability and disability understanding is formed via stories of disability. Combining insights from disability studies, microhistory, and folkloristics the paper explores the relationship between the lived experience of difference and the living tradition of tales of difference. Within that framework we weave together life-threads and legends of Sigríður Benediktsdóttir (Stutta-Sigga) (1815-1900) and Þorsteinn “tól” Gissurarson (1768-1843). This tapestry reveals how Sigríður and Þorsteins differences became material of gossip that had disabling effect on their lives and beyond. When their bodies and physical differences ceased to exist in death, the gossip turned into legends which are still being recreated through printed medium as cultural memory. This recreation has turned their lives into stereotypical legends, narrating their characters and physique in terms of difference. As the paper demonstrates, the legends texts have not change significantly but the social context in which they are received continues to change, influencing the stories interpretations and meaning and reflecting the disability understanding at the time of each re-creation. Because of their disabling difference Þorsteinn and Sigríður have been transformed from real people to folklore of disability. 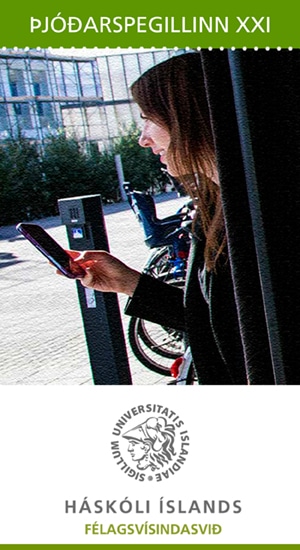